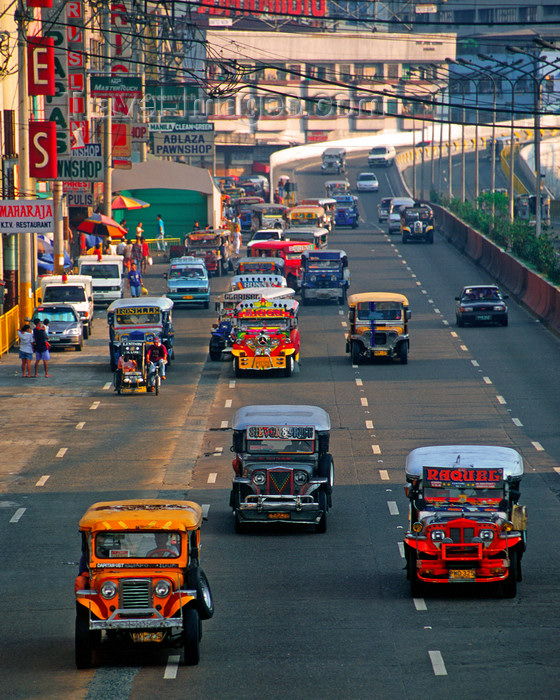 Jeepney, the most popular form of public transport in the Philippines, is a mini-bus sized truck that is reconfigured with two long parallel seats at the rear and a driver’s cabin in the front. Although not run as public transport by the governments, Jeepneys are driven by private owners as a means of mass commuting for cheap. Jeepneys were originally made from trucks left back by the American Troops after World War II. These were smaller than the ones used today as manufacturers have started customising design and utilities to meet with governing norms and standards for transportation.

First Generation Jeepneys- These are ones constructed by re-modelling old jeeps, trucks and pickups, using the same older engines, with seats and essentials fitted, so the Jeepney may be used for public transportation. Due to government norms, vehicles older than 15 years are not fit for use anymore and most first-generation Jeepneys are beginning to see the end of their use.

Second Generation Jeepneys- These are built from old pickups and jeeps but fitted with refurbished engines for better performance and reliability. Second-generation Jeepneys also come with modern amenities like air conditioning, improved seating space and centralised locking for safety. Almost all of these Jeepneys run on diesel and are known to emit excess amounts of smoke from their exhausts.

Third Generation Jeepneys- Built with totally new engines, these offer better amenities in terms of powerful air conditioning and engines that comply with government Euro 4 standards. They resemble a mini-bus and feature a door either at the rear or the front.

Modern Jeepneys- These are the same as third-generation Jeepneys but conform with additional government norms and standards in terms of safety, seating, increased height of the Jeepney, technology to collect fares from passengers, Wi-Fi and GPS. Such Jeepneys are usually assembled by renowned manufacturers and are supplied to transport associations for commercial use.

E-Jeepneys- Jeepneys running on electricity have been proposed and considered as a response to greenhouse gas emissions as well as hikes in diesel prices in the Philippines, but have not become mainstream yet, due to the high price of electricity in the region.

Things you can do to tackle pollution

Air pollution is one of the rising concerns which affect both the living and non-living..

Read More
Saving the future one drop at a time

A large part of our culture here at Tata Motors involves taking steps towards creating..

Here are 3 ideas which as a group we can follow and contribute towards the..

Meals on wheels is big business in Manila

Things you can do to tackle pollution

Saving the future one drop at a time